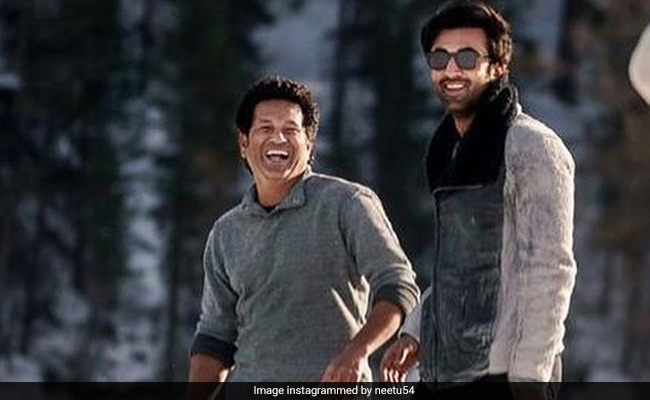 Neetu Kapoor, on Friday, posted a set of pictures of her son Ranbir Kapoor along with legendary cricketer Sachin Tendulkar. In one of the pictures, Ranbir could be seen posing with a bat, while the other shot featured the duo happily posing for the camera, with snow-capped mountains in the backdrop. Sharing the pictures on her Instagram profile, Neetu Kapoor wrote: “Wish we had the powers to knock all sickness, stress, sufferings, viruses out of this planet.” Neetu and Rishi Kapoor’s daughter and designer Riddhima Kapoor Sahni also commented on the post. She left several heart emojis in the comments section.

In the wake of the coronavirus pandemic, a 21-day lockdown was imposed by PM Narendra Modi on March 25, this year. Keeping into consideration, the rise in the number of coronavirus cases in the country, the lockdown has been extended till May 3. The novel coronavirus or COVID -19, originated in Wuhan (China) late last year and it was declared a pandemic by the WHO (World Health Organisation) in March, this year.

Ranbir Kapoor frequently occupies a spot on the list of trends for his relationship with Alia Bhatt. Rumours about Alia Bhatt and Ranbir Kapoor’s romance began after the couple made an appearance together at Sonam Kapoor and Anand Ahuja’s wedding reception in 2018. The actors recently featured in a TV commercial together and they will be seen sharing screen space in Ayan Mukerji’s trilogy Brahmastra.

Rajkummar Rao Is Patralekhaa’s Lockdown Hairstylist. Here’s What She Posted