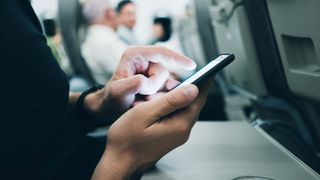 I don’t know if anyone really expected Google Stadia to work on an airplane — but someone had to try. And last week, that someone was me. If the experiment worked, a 2-hour flight would pass by almost instantaneously while I played Shadow of the Tomb Raider in perfect fidelity on a smartphone. If it didn’t, I’d be stuck fiddling with impenetrable settings menus until I finally took apart the whole setup and resigned myself to reading a book.

In the end, I made some very respectable progress in “Beren and Lúthien” by J.R.R. Tolkien (HarperCollins, 2017).

Trying to use Google Stadia on an airplane is an exercise in frustration from start to finish. If you can get the technology to work at all, the results will be unplayable. And if you can’t, you’ll have wasted the $10 or so that it costs to access Wi-Fi on most flights.

To be clear, Google never suggested that Stadia was well suited to flights, but that capability would have been a big feather in the service’s “play anywhere” cap. Here’s what happened to me, so that no one else has to repeat my ill-fated experiment.

Leaving on a jet plane

Those of you who read my Google Stadia review know that I have a mixed opinion on the service. I like its performance, for the most part, and I like that you can play Google Stadia on a variety of screens with relatively little friction. Being able to take your gaming library with you wherever you go is a huge selling point for Stadia. But it also made me wonder: Is it practical to play anywhere? And if not, where can you actually play?

In a way, an airplane is the perfect test bed. A commercial flight is a setting in which you need a distraction for a long period of time. You’re probably in the middle of a game you left at home and would prefer to keep playing it. And these days, most flights offer Wi-Fi with respectable bandwidth and moderate pricing.

Granted, airplane Wi-Fi is not exactly renowned for its speed or consistency. Sometimes, it can be a struggle to send an email, let alone stream a whole game. And most airlines restrict bandwidth hogs, such as Netflix and Amazon Video. But I reasoned that Stadia is new enough that it won’t trip any content filters. Besides, I knew that I’d be taking a Southwest flight, and that company’s bandwidth is rated at 11 Mbps, which technically exceeds Stadia’s minimum 10-Mbps requirement.

I didn’t expect excellent performance while playing Stadia on a plane. And I wasn’t at all sure it was going to work. But when I examined all the factors independently, it didn’t seem impossible either. Besides, if it did work, it’d be too incredible of a find to keep to myself.

First, the setup: Once I got situated in my seat, I pulled out a Google Pixel 3a smartphone, a Stadia controller, a Power Support Claw phone grip and a USB-C cable. (Eventually, you’ll be able to do this without the USB-C cable.) Putting the whole apparatus together without annoying my seatmates wasn’t too tough, even in a middle seat.

Then, with the Pixel, I accessed Southwest’s Wi-Fi options. Like a lot of airlines, Southwest lets you watch movies, certain streaming shows and live TV through your device without paying any money. If you want to access other parts of the internet, it’ll cost you $8 for 24 hours of access. This isn’t really a review of Southwest’s wireless service, so I’ll just say that it’s comparable to most other midrange airlines in the United States.

Once I coughed up the cash, I was free to connect. After my connection stabilized, I booted up the Stadia app, which told me that, yes, I had the bare minimum of Wi-Fi connectivity to run games. I turned down the graphics as far as they would go in the Settings menu and booted up Shadow of the Tomb Raider. To my amazement, the game started.

For about a minute, I moved Lara through an isolated Mexican village in all of its pixelated glory. The game lagged and the camera took forever to catch up with the heroine, but Stadia was, technically, working 30,000 feet from the ground. I paused to look at the in-game map, and that’s when the Stadia app froze up. I tried to restart it, to no avail. I had similar results for Gylt, Mortal Kombat 11 and Kine. After about half an hour of rebooting, reconnecting and restarting, I finally conceded that Stadia was simply not meant for this kind of stress test.

And who could blame it? Don’t forget: Even at its lowest settings, Stadia consumes about 4.5 GB of data per hour. I’d be surprised if airline Wi-Fi could distribute 4.5 GB per hour to all of its passengers, let alone a single one.

The immediate lesson here is simple: Don’t waste your money on airline Wi-Fi if your intent is to play Stadia games. It won’t work. I didn’t really expect it to, but I had to try it empirically before I wrote off the idea completely.

But the bigger issue comes back to Stadia’s overall utility. You can’t play games on an airplane, fine. But if you can’t play games anywhere that has dodgy Wi-Fi, a lot of hotels are out, too, not to mention a lot of coffee shops, libraries, bars and other public spaces. If Stadia works only in private homes with sterling Wi-Fi connections, that means you’re probably playing it at home most of the time. And if you’re playing at home, it’s not that different from playing on a console or PC.

In any case, if you want to play games on an airplane, your best bet for now is still a Nintendo Switch. It doesn’t look like Sony is getting back into the handheld game anytime soon.