With the City of Johannesburg the epicentre of the Covid-19 outbreak in Gauteng, the municipality says it is confident in the capacity of its burial sites, should mass casualties result from the pandemic.

Gauteng has led the other provinces in terms of number of positive cases, and as of Thursday afternoon had 930. Of that, Johannesburg has more than 500 cases. Ekurhuleni and Tshwane have more than 100 cases each.

Other municipalities which oversee big population sizes in the country also told News24 of their plans regarding a possible looming need for mass burial space.

Addressing a media briefing alongside other top scientists on Monday night, the chairperson of Health Minister Zweli Mkhize’s advisory group for Covid-19, Professor Salim Abdool Karim, said there were eight stages of dealing with the pandemic and its aftermath.

He noted stage seven was for the country to deal with bereavement and the aftermath, including having to expand burial capacity, enforcing regulations at funerals, and managing the psychological and social impact of the pandemic.

Cemeteries and crematoria plan for disasters

While there is much uncertainty about what lies ahead, now that there are more tests being done and more positive tests being recorded by the day, the eThekwini Municipality says it is focusing attention on conducting tests and ensuring the virus does not spread.

“Currently, we are flattening the curve; whatever else comes will come, and we will be able to handle it,” said spokesperson for the municipality Msawakhe Mayisela.

The City of Johannesburg has four active cemeteries currently receiving new burials, amounting to 692 hectares, the City’s spokesperson Mlimandlela Ndamase said. He added that the sites have a burial capacity for 1 384 000 bodies.

“Cemeteries and crematoria do not only plan for weekly burials, but also for a disaster that might occur, and which requires the need for mass burials, hence the available space.

“With the coronavirus in South Africa, the City has these facilities ready to be mobilised, should the need arise,” Ndamase said. 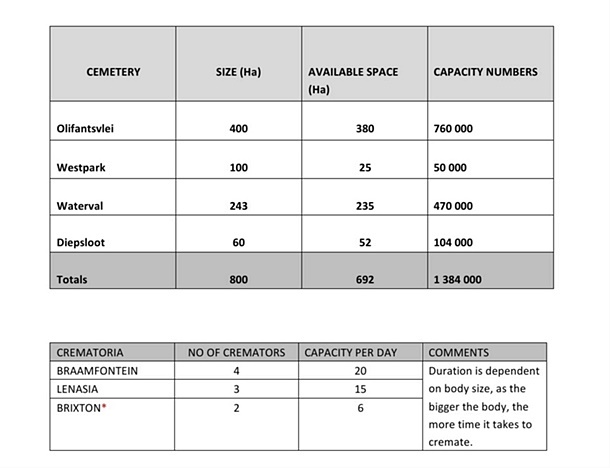 Meanwhile, the City of Tshwane says it is also rolling out plans, should a scenario for mass burials arise in the metro.

Spokesperson Selby Bokaba said the City is currently finalising its plans for general burials, including mass burials, which will then be submitted for approval.

“In the absence of clear directives from national health [department] on how long the Covid-19 virus remains active in human remains, the City is not in a position to make any commitments regarding allowing reopenings and exhumations.

“The City, therefore, intends providing for separate vacant graves for Covid-19 cases which, depending on the outcome from national health [department], will allow for decisions to be made when more information is available,” Badroodien said.

The City also owns Maitland crematorium, which has spare capacity, and is managed by a lessee.

Badroodien added that there were also privately-owned crematoriums in the Western Cape – in Durbanville, George, Paarl and Worcester.