This Throwback Pic Of Sridevi, Janhvi, Khushi And Boney Kapoor Is Pure Love 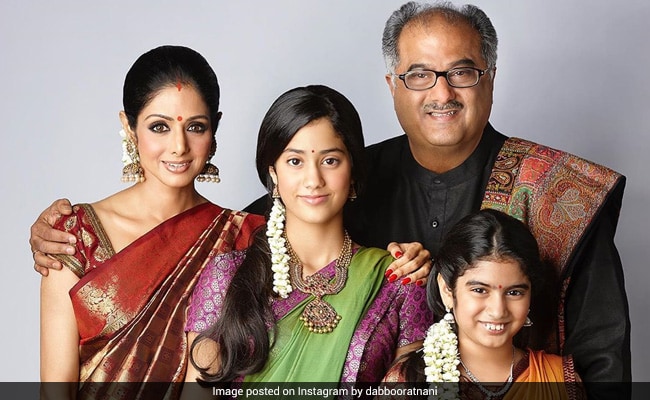 Ace photographer Dabboo Ratnani shared a beautiful throwback picture of the Kapoor family. The picture features the late actress Sridevi, along with her daughters Janhvi and Khushi, and her husband and film producer Boney Kapoor. In the lovely picture, Sridevi can be seen dressed in a saree and she looks simply beautiful. While little Janhvi and Khushi, can be seen wearing green and bright yellow sarees, respectively. Boney Kapoor, also dressed in a traditional outfit, can be seen smiling for the camera. The picture happens to be from one of the photoshoots that the family did for Dabboo Ratnani. Sharing the picture on Instagram, Dabboo Ratnani wrote: “A picture is worth a thousand words, but the memories are priceless.”

Take a look at the picture here:

Sridevi, who is often addressed as Bollywood’s “first female superstar,” acted in 300 films in a career spanning over 5 decades. Her last film was MOM, which was also produced by her husband Boney Kapoor, for which she was posthumously awarded the National Film Award for the Best Actress in 2018. The actress’ last onscreen appearance was in Shah Rukh Khan’s Zero – her portions were shot before her death.

Amitabh Bachchan was asked if he wants to become prime minister, his response is hilarious

WATCH | PART 9: Here are some of the antics South Africans…

Twinkle Khanna Shares Her 25 Year Prophecy About Her Life