PICS | This is where Cape Town’s Covid-19 ‘hotspots’ are

Five areas within the Cape Town metro have been identified as “hot spots” by the Western Cape government.

Lit up with red dots on maps of suburbs, the province has revealed where clusters of Covid-19 cases are being detected in the metro.

Deaths in the province stood at 235, though 5 677 people had recovered from the virus.

In a digital press conference on Wednesday, the province said it believed that having 62.6% of the national number of cases simply means that community transmission “seeded” earlier in the Western Cape, and that other provinces could soon follow suit.

They had identified clusters of outbreaks as “hot spots” and have focused testing, screening, tracing, support, and prioritising treatment of the most vulnerable from these hot spots.

Most of the cases in the province are among essential service workers, such as in the retail sector, and the projections by the province’s experts are that 90% of people will have no or mild symptoms.

It is hoping to manage those cases through self-isolation and quarantine where possible, assisting those who do not need to go to hospital with self-management, unless otherwise necessary.

The hot spots identified so far are:

Dr Melvin Moodley, director of strategy at the Department of Health, said most people are familiar with the public dashboard of the Western Cape’s cases, that is updated every day at 13:00.

However, there had been calls for more granular data at suburb level for planning purposes.

The data he presented during a briefing with Premier Alan Winde on Wednesday is 70% to 80% complete and accurate, but the department felt it would not be appropriate to hold it back any longer.

“You might see Cape Town lighting up,” he said, explaining that this was due to the city having many suburbs.

Harry Malila, the director-general of the Western Cape government, presented these areas on the map in Cape town as “hotspots” that have been identified for extra intervention and support. According to the number of cases there are for this area, there were 139 cases in Du Noon, on either side of the N7 highway.

Du Noon is one of the areas prioritised for de-densifying, according to the Department of Human Settlements.

According to information presented to the legislature, 1 500 households have been identified for this because there are too many people living too close together. There are public and private schools that serve Grade 7 and Grade 12 pupils in these areas.

In the Tygerberg area, the hotspots include Bellville South, Eindhoven, Cravenby and Elsies River, with a ‘big red dot” around the Delft area. Malila said Khayelitsha had two hotspots: One on the southern part of the N2, between Mew Way and Spine Road: The second hotspot in Khayelitsha is at the northern part of Baden Powell Drive, moving towards Mitchells Plain. 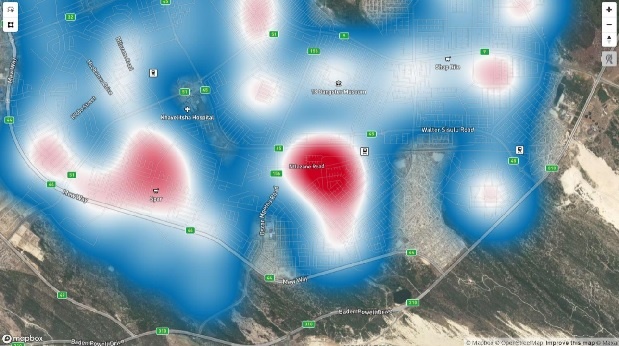 The next hotspot is in the Klipfontein region, which includes Gugulethu, Athlone, Manenberg and Bridgetown. Gugulethu is displayed as a hotspot in the centre of the slide, with Manenberg, Heideveld and Crossroads on either side. (Supplied by Western Cape government)