When I left my ancestral home in Dhaki Munawar Shah, Peshawar, many moons ago, I kept humming while packing, ‘Yeh galiyan yeh chaubara, yahan aana na dobara. Ab hum to bhaiy pardesi,’ the song from the 1982 film Prem Rog.

And the moment I heard of Rishi Kapoor’s demise, last week, that second refrain immediately came to mind.  The 1982 film was produced and directed India’s Great Showman Raj Kapoor  and featured his son Rishi Kapoor in the leading role. Raj Kapoor, like his father the great Prithviraj, was born five houses up the street from my residence in Peshawar.

I have noted elsewhere that Peshawar remembers affectionately those who remember Peshawar. And the Kapoors are one such clan. Despite his wish to do so, Raj Kapoor couldn’t make it back to see his ancestral home, but Shashi Kapoor did and so did Randhir and Rishi Kapoor. The two younger Kapoors were visiting Pakistan in late 1990 (or early 1991) to shoot for the movie Henna, when they were invited by the then Prime Minister Mian Nawaz Sharif.

The brothers later said that Sharif was a most gracious host and asked them if there was something – anything – he could do for them. Rishi said that he wanted to see their family home in Peshawar that was built by his great grandfather Divan Basheshwar Nath Kapoor, but he didn’t know where exactly it was located. Sharif picked up the phone and instantly arranged for them to visit the Kapoor house.

Rishi and Randhir were received in our street like royalty and were later feted at the provincial governor’s mansion. They got to visit their family house, which by the time had turned into a school. Right across from the structure was a lot which doubled as an area where wedding feasts were held and also, on occasion, was where mourners would gather to say prayers when someone from the neighbourhood passed away. And after the prayers and condolences, the people present, lounging on charpoys used to talk and gossip abou the departed soul. It would range from loudly and fondly extolling their virtues to whispering about their vices, all done over several rounds of qahwa, the quintessential Peshawari green tea. An obituary of sort would thus be composed, and repeated orally for years.

Also read: Rishi Kapoor Proved That Good Actors Only Get Better With Age

I don’t intend to write a formal obituary for Rishi, or Chintu as he was affectionately called, but I do wish to reminisce about him – fondly – for he was Peshawar’s grandson, who had wished to return one last time to the land of his ancestors. 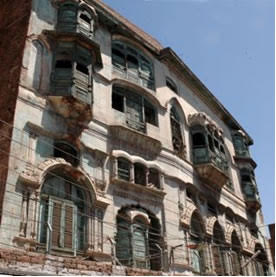 In the last few years of his life Rishi Kapoor took a lot of flak, both in India and Pakistan, for his candid, no-holds-barred Twitter postings and other banter. But for me and many of my Peshawari compadres, that enfant terrible image didn’t even register. In Peshawar, if you say Rishi Kapoor, people hear Bobby. For us, the Rishi Kapoor image etched in our collective memory will always remain as that of the youthful, lover boy Raj Nath aka Raja, serenading a teenage Bobby played by Dimple Kapadia. Released in 1973, Raj Kapoor’s film made puppy love cool in the entire subcontinent. It was impossible for any teenager to watch the movie and not relate to the instant crush and chemistry between the ebullient young lovers. It did for the teenagers what Raj Kapoor and Nargis in Awara, Dilip Kumar and Madhubala in Tarana, and Dev Anand and Waheeda Rehman in Guide, had done for the slightly older vicenarians and tricenarians in their era.

The film came at an interesting juncture in Bollywood history, when the three greats of Bollywood Raj Sahib, Dilip Kumar and Dev Anand were past their prime, Rajesh Khanna was at his peak and a tornado named Amitabh Bachchan was about to sweep everything before him. The melodramatic, mature romance and Nehruvian ideals of the post-partition cinema were long gone. Rajesh Khanna was at his romantic best and Amitabh Bachchan was just beginning to get into his element as the angry young man.

According to his biographer Bunny Reuben, Raj Kapoor had two greatest films under his belt at that time: the greatest hit of the era, Sangam, and the greatest flop of the time, his semi-autobiographical epic, Mera Naam Joker. With Joker tanking at the box office, Raj Sahib had literally gone bust – and sour. He was miffed at upstarts coming to him and giving tips about making a successful movie. Raj Kapoor decided to show them all as to who remained the undisputed Showman of Bollywood. He chose his son Rishi for the boy’s role in Bobby. A chubby 15-year-old Rishi had already played a younger Raj Kapoor in the first chapter of Mera Naam Joker and won a national award for it for his portrayal as an adolescent smitten by his teacher. In a way that role primed Rishi for graduating to a proper lover boy, and perhaps that is what Raj Kapoor had in mind.

When he offered the new role to Rishi, he asked him if he would “care to work with a flop filmmaker but an extremely demanding director”. Rishi obviously agreed and the quest for the heroine began. The lucky one chosen was Dimple Kapadia, the teenage daughter of a Gujrati industrialist Chunnibhai Kapadia. Raj Kapoor most likely saw a reflection of Nargis in Dimple’s mannerism and voice. He wanted to have fresh, innocent and impressionable teens as his lead characters and in Rishi and Dimple, he got the perfect pair. Two stars were thus born!

Also read: Amar Akbar Anthony is a Reminder of a Gentler, Secular India

Rishi Kapoor went on to do many more films as a leading man throughout the 1970s, 1980s and  swam against the tide of macho men and action heroes. In a Bollywood where the male lead was gun-wielding tough guy who was ready to fight the unjust system, Rishi remained the guitar-toting romantic hero.  He bookended his career by doing great many character roles and aced each one of those. But the vibrant spontaneity that he picked up in Bobby remained the sheet anchor of his acting technique. An understated charm, a bright smile and natural dialogue delivery remained his hallmarks. Unlike the older generation of his family – Raj Kapoor, Shammi Kapoor, Shashi Kapoor – he did not go through the grinding mills of his grandfather’s Prithvi Theaters. He did not go to a formal film school or followed method acting techniques. And that may be the reason for his refreshingly natural performances.

Chintu used to fondly remember his actual first appearance on celluloid in his father’s 1955 movie Shree 420, in which he along with his elder brother and sister were to walk in heavy rain. He said that he, barely 3-years-old, would cry because the rain got into his eyes and shot had to be cut. The movie’s leading lady Nargis found a novel way to get him to shoot without crying: bribe him with chocolate if he would complete the take without crying. And it worked. From that inducement to becoming the quintessential chocolate hero of Bollywood, Rishi Kapoor lived a fun and full life. He may have lost the battle to the blood cancer, but he won millions of hearts around the world, and certainly in his ancestors’ native Peshawar.

Adios Chintu ji, you will be sorely missed but never forgotten.

Mohammad Taqi is a Pakistani-American columnist. He tweets @mazdaki.